It’s Wednesday, and this week, I made a card using Bearly Swooshin' - T202 by High Hopes Rubber Stamps for the main image and Roundin' Up - G190 (High Hopes Rubber Stamps) for the sentiment. Winter was always a fun time for me growing up. We had so many outdoor rinks and played so many winter sports. I tried X-Country skiing, but in no way would ever attempt downhill skiing, I was dangerous enough on X-Cross Country skis. I wonder it that's why everyone I ever went skiing with would only go once with me. LOL! 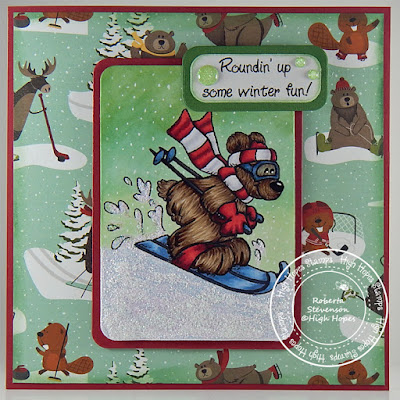 To make my card this week, I began with a card base of AC Cardstock - White cut and scored to be 6" x 6". I cut the background paper from Recollections - Burgundy cardstock to the same size as the base and used double-side tape to apply it directly to it. Photo-Play - O Canada 2 - Ice Rink paper was cut to the size of 5.75" x 5.75" and inked around the edges using Tim Holtz Distress Ink - Rustic Wilderness. I applied this directly to burgundy background using double-sided tape. Using Hero Arts - Infinity Dies - Rounded Rectangle dies and my Cuttlebug, I die cut the following: Copic Marker X-Press It Blending Card, Recollections - Burgundy cardstock, AC - Green Cardstock and Recollections - White cardstock.

The image and sentiment were stamped using my MISTI and Memento - Tuxedo Black ink. I coloured in the image with Copic markers and used a Gelly Roll Sakura #8 Pen to create the snow in the sky and whites of the bear's eyes. Sakura Glaze - Black Pen was used for the eyes and nose. Just love the embossed look those 2 pens give to an image. Lastly, I added some Stickles - Diamond and some Clear Glitter glue for the snow. Once the glitter was all dry, I attached the finished image to the burgundy rounded rectangle with 3M VHB double-sided tape to pop it up. Then, I applied 3M double-sided tape onto the back of the larger rectangle to pop it up on the pictured background. The sentiment was inked with Tim Holtz Distress Ink - Rustic Wilderness and I ran it through my Xyron Create a Sticker and placed it on top of the small green rectangle. I added 3 layers of the 3M VHB - 2 sided tape to the one side to pop it up and some glue and placed it on top of the popped-up coloured image. Lastly, to complete the card, I added some YNS Gumdrops.

Hope you like it and have a fantastic week!

Posted by Roberta Stevenson at 12:00 AM 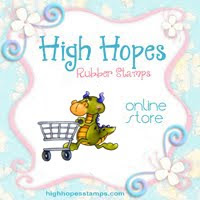 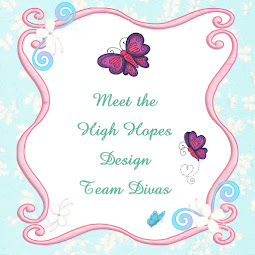 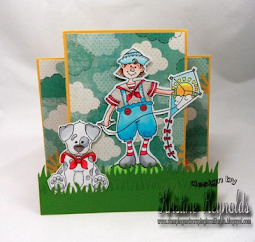